If you are interested in participating in the 2021 count, check back here for an update to be posted sometime in November.

About the Christmas Bird Count

Every December, people all over the world participate in a citizen science project called the Christmas Bird Count. The Guelph count takes place in a 24km diameter circle around the city, and is divided into sections. Birders go out in teams to identify and count as many birds as possible in a single day in their section and results are compiled at a “tally rally” at the end of the day. The data is an important contribution to knowledge of wintering bird populations and how they are changing over time. You can find more information on the CBC on Bird Studies Canada’s website at: http://www.bsc-eoc.org/volunteer/cbc/index.jsp?targetpg=cbcparticpate&lang=EN

The CBC is a great way to participate in avian science, learn a little about the birds that spend their winters here in Guelph, spend time exploring Guelph’s various habitats, and make some new birder friends. People of all levels of experience are welcome to participate. 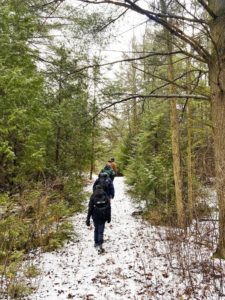 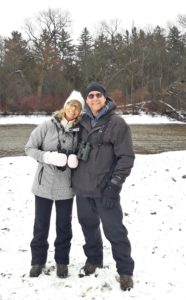 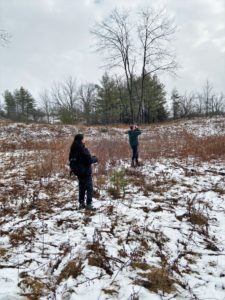 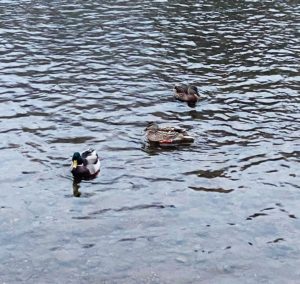 Due to COVID-19, this was a very unusual year. To ensure a physically distanced a safe count we had to decrease the number of participants and increase the number of groups. As a result, we had only 50 participants this year, compared to a record turnout of 83 participants in 2019. And instead of primarily working in 13 groups we had a total of 23 smaller groups this year. Those groups provided record coverage in terms of number of group hours by car (52.5), on foot (81.75) and total group hours (134.25). They covered 685 km by car (not a record), a record 163 km on foot, for a total of 848 km (not a record). They also did 13 hours and 65 km of owling, both of which were records.

On count day it was foggy in the morning (which probably reduced counts for raptors and some others), and cloudy in the afternoon. Temperatures ranged from 2 to 4 Celsius. There were 0-5 cm of snow on the ground. Still water was frozen and moving water was mostly open.

Having a high number of groups and area covered on foot, as well as a major influx of winter finches and a generally mild fall, resulted in a lot of high counts. We found 72 species, which is a new record for number of species. We may have had a record number of records, with 9 species at their all time high count, including one new species, an Eastern Phoebe, the first flycatcher on the Guelph Count. This would have been amazing 20 years ago, but given climate change, it’s somehow not all that surprising.

The other record counts were:

Red-bellied Woodpecker – 25 – an ongoing increase, as this species expands from the south.

Common Raven – 43 – an ongoing increase as this species expands from the north.

Red-breasted Nuthatch – 81 – more birds than usual left the boreal, along with the finches.

Winter Wren – 9 – perhaps due to mild conditions – one bird was even singing!

Swamp Sparrow – 20 – presumably due to mild weather – many along the Speed River.

Pine Siskin – 562 – a large influx seemed to happen right around the day of the count.

We didn’t have very many species with low numbers. Exceptions were: Canada Geese with only 3461 this year, down from 6427 in 2019; House Finch, with only 7, which is the lowest except for the 2 when they were first reported in 1984; a record low of 62 House Sparrows, which is a big drop from last year’s 126 and consistent with a long-term decline; and, zero American Kestrels, though very low numbers are now the norm in winter.

Other interesting records were a single Red-winged Blackbird and one Common Grackle, 2 Cackling geese and one Fox Sparrow.

During Count Week, we also had 1 Bufflehead, 1 American Wigeon, a Snowy Owl, and 1 Brown-headed Cowbird. On a sad note, a Northern Saw-whet Owl was picked up “recently dead” during the count period.

I should mention that, although the results are in one way anomalous because of the change in approach (with more but smaller groups), the analysis of CBC data is based on birds/group-hour rather than on simply the number of birds reported, which should even out a lot of this year’s discrepancies.

Thanks to everyone who helped out with collecting the data, especially the 23 group leaders. Thanks also to Wild Birds Unlimited for donating a prize for a lucky CBC participant. The after count tally rally that is normally done in person was instead held by Nature Guelph via Zoom. Fingers crossed that we’re back to normal next year, eh!